You can’t move for vegan-friendly Easter Eggs these days, if I were to attempt to review them all on here, I’d need an overdraft and a new wardrobe of clothes.

However, after my first blog on Easter eggs, I felt duty-bound to buy and, more importantly, eat more for your benefit.

This time, I went for the Moo Free Cheeky Orange Egg with Buttons (http://moofreechocolates.com/) and, as before, the buttons were in the packaging, not inside the egg as Easter tradition dictates.

However, I’m a big fan of chocolate orange, so I was also disappointed to learn that this does not count as one of my five a day – it’s got orange in it, so why not?

Moo Free have been one of the standard bearers for vegan confectionary for several years. They set the bar high before the supermarkets began to smell the money in veganism. While the choice is very, very welcome, please do check out the full Moo-Free range – I’m a big fan of supporting vegan businesses where possible.

Anyway, time to start on the egg. It tastes like chocolate with orange in it.

Is that enough, or do you want more? OK, well, the orange is actually infused into the chocolate through orange crystals, so as well as a subtle burst of sweet orange, you also get a satisfying crunch – lovely. I think “cheeky” is the right word, as the chocolate has a light texture and taste and a substantial sugar-hit, but the orange is not over-powering at all. It’s a nice understated addition to the taste that renders the egg very moorish.

While the buttons are small, and there aren’t a huge number of them, they are a nice, rich, chocolatey after treat – they don’t have the orange crystals, but this adds a nice balance to the whole package in my view.

It’s nice to have a milk chocolate alternative which is so tasty and the packaging and sweetness are both very child-friendly.

But while we’re on chocolate treats, I’m going to throw in something for the adults – the Vego Bar.

If you’re vegan and not familiar with these, where have you been? These beasts are available all year round, but Easter gives you a good excuse (should you need one) to tuck into a Vego.

They are thick hunks of chocolate filled with yummy hazelnuts. The nuts add bite and flavour, but, really, the chocolate chunks are so thick and creamy, they are an utter delight full-stop. Most vegan fairs, online vegan shops and many independent health food shops stock them. Go try. 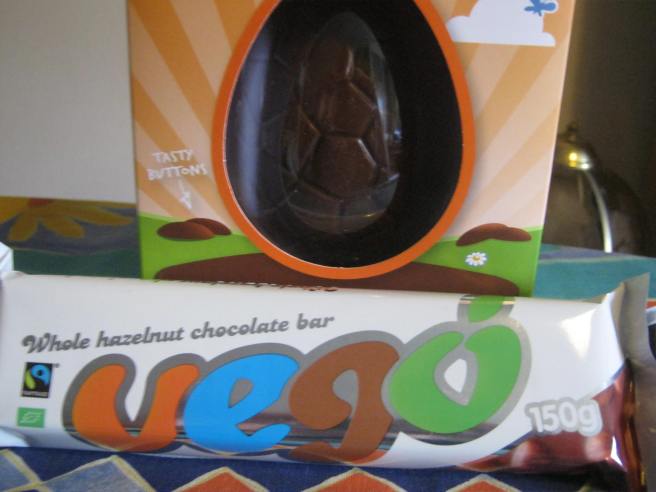 2 thoughts on “Moo-ve over for the Vegans at Easter”