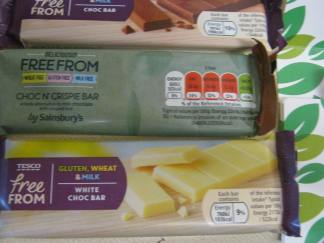 The rise in supermarkets catering for vegans has been phenomenal over the past few months. The Sainsbury’s vegan cheese release created such a stir, that I wrote my most popular blog thus far on the subject. So I decided to follow it up with a look at something sweet.

There has been a wide range of vegan-friendly chocolate bars on sale for many years, but, recently, supermarkets have picked up on that too. Many dark chocolates are already “accidently” vegan, so I decided to have a look at supermarket equivalents to milk chocolate treats. Most of them are pretty cheap too, at around 40p for a small 35g bar.

I love the way Sainsbury’s have decided that their Free From range is “delicious”, the name is slightly presumptuous, but, in this case, pretty accurate. The orange hit here is very strong and is the prominent taste – as should be the case. The fact the chocolate is also quite creamy in texture makes this one a double hit with me.

I quite like the crunch of little rice krispies in chocolate and this one works very well. In fact, it’s the perfect partner for an early evening cup of tea. It certainly doesn’t skimp on the rice pieces and, like it’s orange sister, it has an impressive level of creaminess.

I was so excited when I first saw this. One of my earliest memories was getting a Milky Bar Easter egg as a child, and so, without realising it, I decided I had actually missed Milky Bars – and now there’s a cruelty-free alternative available in many local branches of Tesco! It has a very sweet smell about it and, in fact, also tastes very sweet – but creamy too. It’s quite heavy and indulgent, but I like that, especially in such a cheap bar. My favourite of all the bars in this article.

Another nice and cheap bar. This one is a little hard when you bite into it, but many people like the crunch effect. It does have an overpowering sugar hit, but isn’t really creamy enough for me. That isn’t to say it isn’t nice, it is a nice treat, it just doesn’t have the chocolaty taste that some of the other possess.

I love the name of this – it will certainly appeal to younger vegans. It’s quite a chunky bar too – impressively so. It’s another one that offers a strong hit of sugar and an overpoweringly sweet taste. This means, again, that the creamy taste is lacking somewhat, but there is still a nice taste of chocolate hiding beneath the sweetness.

The rise of veganism over the past decade has be cataclysmic. It seemingly came from nowhere and its growing popularity almost mirrors the rise of the internet.

Change seems to happen so much more quickly in the 21st century, but much of that is down to perception as technological advances overshadow the changes in society itself.  However, the increasingly availability of vegan products and vegan options on restaurant menus cannot be underestimated.

The word “vegan” itself was coined in 1944 by British man Donald Watson. He is said to have created the word to describe vegetarians who also reject dairy products and eggs – something he felt very strongly about. Tuberculosis had been found in 40 per cent of the UK’s dairy cattle the previous year and Watson used this to his advantage, claiming that vegans are protected from tainted food. The modern parallel with bovine TB and the badger cull cannot be ignored here.  It proves that problems with industrial farming are by no means a new issue, and things have got worse rather than better in that respect.

Several years before the creation of the word, one of London’s best known vegetarian restaurants had been named The Vega. Opened it 1934, it was the brainchild of Walter and Jenny Fleiss. The couple had a restaurant under the same name in Cologne, but had fled Germany when it became apparent that Walter was on a Gestapo list.

The first animal product-free cookbook was named Kitchen Philosophy and was published in 1949 by William Horsell, also from London, UK. The recipes excluded butter and eggs, so it is considered the first vegan cookbook – published many years before the word even existed.

Of course, discussions over the rights and wrongs of using any animal products had been raging long before “vegan” came into being as a word.

Vegetarianism was first mentioned by philosopher Pythagoras (his mathematics theories provoking groans in school children everywhere) around 500 BCE (before the common era). Followers of Buddhism, Hinduism and Jainism have long rejected meat, considering it wrong to inflict pain on other animals. Also, the Ephra Cloister, a strict religious sect formed in Pennsylvania in 1732 advocated vegetarianism and celibacy.

The first Vegetarian Society was formed in England in 1847, three years later, the American version came into being.

The point I’m making is that veganism and vegetarianism aren’t new concepts, they are not trends that suddenly appeared with the birth of the internet, they are compassionate theories that have developed over time – and, incidentally, no, Hitler wasn’t a vegetarian, that’s a myth that has also developed over time.

When I first became vegetarian, there was a limited number of processed foods available, soya was the only plant milk and vegan cheese was unheard of, so in that respect, things have changed very quickly. Market forces have certainly given us a huge range of vegan products over the past few years, and social media means the word is definitely out. Things are looking very bright indeed for the future of veganism. 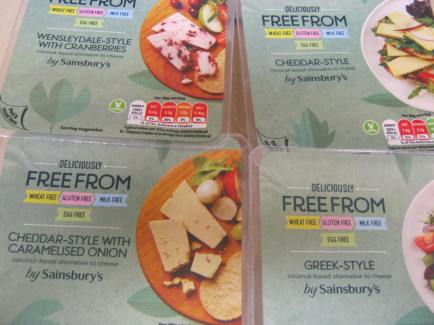 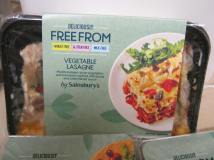 Stories connected to vegans automatically get multiple shares and provoke debate on news posts, therefore, the Gary/Vegan Cheese debate shouldn’t really come as any surprise. It certainly hasn’t done Sainsbury’s any harm. You couldn’t buy this much advertising! Several national news outlets even picked up on the debate and it went viral quicker than many cat videos.

If you missed it, basically, Sainsbury’s has released a number of own-brand vegan cheeses – something which got the vegan community instantly excited – it doesn’t take much with us lot! Anyway, one less than vegan social media user became upset over the term “cheese” when it comes to dairy-free products and posted a long rant to this effect.  She ended with “call it Gary or something”. So vegans did. Instantly, and hilariously, the ranter’s joke backfired and sent the products’ new moniker viral. I’m sure non-vegan Garys are over the moon.

It all proves two things: Vegans do have a sense of humour and new vegan products sell themselves in the world of social media.

Personally, I don’t care what you call it. I see it as rather petty to get offended over what a product is named. In fact, Sainsbury’s haven’t actually labelled them “vegan cheese” on the packaging – instead they are presumptuously called “Deliciously Free-From…” then Cheddar Style etc.

Much of the publicity surrounding the release centred on the fact that the cheeses are coconut-based. The cheeses actually contain between 22 per cent and 24 per cent coconut oil and they are not soya-free. So if you don’t want soya, you’re better off with Violife or Vegusto. Personally, it doesn’t bother me and claims soya gives men boobs and the such-like are pretty nonsensical – it is certainly no quick fix for sex-change patients. Also, many meat products also contain soya and many animals bred for meat are fed on the stuff.

I decided to try the new products, including a cheese spread and new lasagne, so I could share my thoughts with you lovely people.

The lasagne was something I was very excited about, but it really isn’t as good as some of the home-made offerings I’ve tried. It is, however, vegetable and not soya mince-based. It also says it “serves one”, which in supermarket terms, means serves one with chips, a salad, garlic bread and pudding!

I avoided going down the lazy microwave route and cooked it properly. But it still stuck to the bottom. Once out of the plastic dish, It was still a little watery and doesn’t have any real spice kick. But there is a fair amount of tasty veg and the pasta tasted nice and creamy. I’d have it again – probably with lots of chips.

The Garlic and Herb Soft Cheese is a lovely breakfast treat on toast. It certainly doesn’t skimp on the garlic, it has a real kick and a nice, light texture. It’s delicious in fact. And, as with the cheeses themselves, there is no underlying coconut taste or, indeed, after-taste. Plus, it’s actually softer and more spreadable than many similar products on the market.

Now let’s look at the cheeses themselves. I’ll start with the

. This is a white cheese with a creamy taste and soft texture. It has a medium-strength hit and would work very well in a salad. I can’t actually remember what “real” cheese tastes like, so I have to judge the products on their own merits.

The Cheddar Style is probably the most traditional alternative, and I would say it has a cheesy taste given what I’ve said above. It’s the kind of vegan cheese I would have in a sandwich with pickles.

I approached the Wensleydale Style with Cranberries with some trepidation, as I, generally, don’t like sweet and savoury mixed. But I was pleasantly surprised. It’s certainly colourful – it looks like ice cream, but the sweet aftertaste isn’t unpleasant and it’s another creamy one. This is something that would work well on crackers.

Finally, comes the best – Cheddar Style with Caramelised Onion. This is the one that made angels dance around my mouth and spread glitter over my tongue! The powerful onion taste is to die for, making this one that would rule over the cracker kingdom.

At £2.25 each for a 200g pack, they are cheaper than many other vegan cheeses and they come in re-sealable packaging – which is always a bonus. All in all, they are certainly a hit with me.