The introduction of the Vego White bar caused quite a stir among vegan chocolate fans.

Vego bars have long been a favourite of many vegans and vegetarians with a sweet tooth, the fact that they’ve branched out – first into a chocolate spread and now into white chocolate – has been a cause for celebration.

But is the new bar any good?

I, like many others, love the traditional Vego bars – they are so chocolatey – they’re big hunks of delight with a nut in the middle. I think it’s the size and mass of vegan chocolate which makes them so good – and addictive. But they are rather expensive at around four quid for a normal bar. They also tend to leave one’s hands with a chocolate coating as it’s impossible to eat a bar before it starts melting. Vego White doesn’t suffer from this problem.

One issue I do Have with it is the foil shroud which houses it inside the main wrapper – that’s double the packaging folks, which isn’t good. It is also on the pricey side at £2.09 for a 50g bar from the independent health food shop where I bought mine.

Vego’s white chocolate sister is thinner than its more established sibling and lacks the deep flavour punch of the vegan chocolate’s elder statesman. However, it has almonds! We all like almonds, right? It even states “Almond Bliss” on the wrapper! They certainly add a welcome crunch to this new plant-based confectionary creation.

The Vego White is, like other vegan white chocolate bars, incredibly sweet. If it’s a sugar hit you’re after, then this is definitely the one you want. Personally, I love it, as I get older I do seem to be developing more of a sweet tooth.

However, it has to be said that other, much cheaper vegan white chocolate bars smash you with a similar sweet sensation. I’m thinking of both Sainsbury’s and Tesco own brand bars in particular – although both of that lack the almonds and the relate crunch which accompanies this vital ingredient.

I was also concerned about the “main contain traces of milk” disclaimer on the wrapper – which also proudly displays the word “vegan”. This basically means milk products are made in the same factory as I understand it. Does this put you off? I must admit, I’ve lived with it so far.

So, is Vego White the new king of vegan chocolate.

No. But neither is the other Vego. I like both, I like them a lot, but that accolade still goes to Choices. I don’t see them around as much these days, but a Choices Easter Egg has always been a must and the chocolates are simply divine. I think in their case, it’s the caramel flavouring which makes them stand head and shoulders above the opposition. 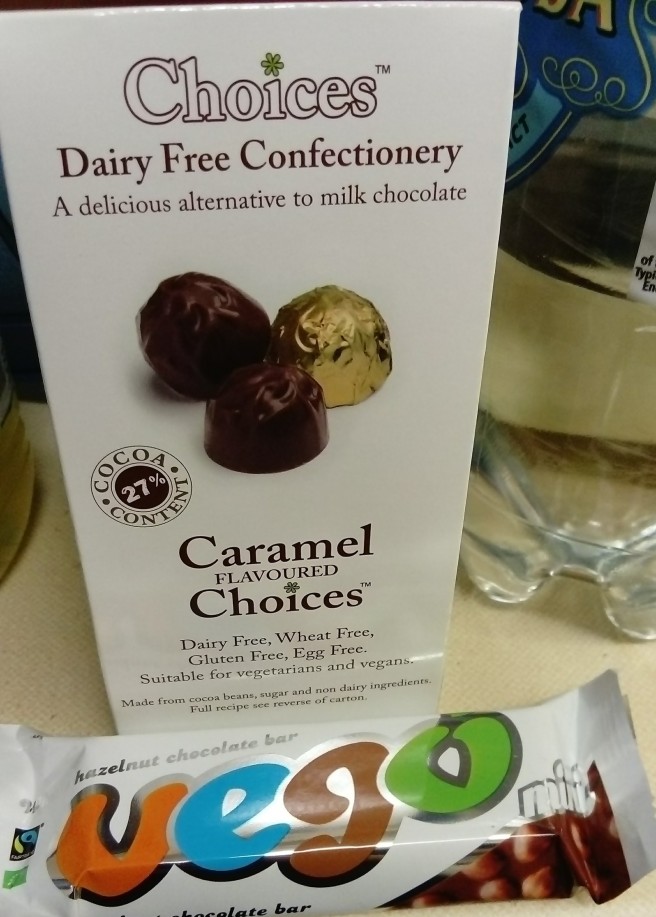