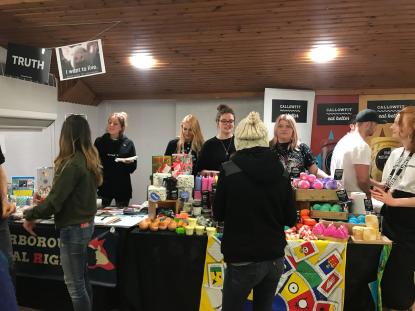 We don’t know exactly how many people attended the Thrive Vegan Festival in Peterborough, all we know was it was an overwhelming success.

We put it together in a couple of months. Our small team, spearheaded by Kim Coley, of Soul Happy Well Being Centre in the city, booked the stalls, organised the workshops, the venue, the layout, the rules and regulations and managed to really put veganism on the map in our little UK city.

Kim hosts and I help with Peterborough Vegetarian and Vegan Group’s monthly foodshare, it was this group which was the catalyst for the event. The Thrive Tribe formed with the sole aim of bringing a vegan Christmas fair to life. Peterborough had never held a vegan event. Smaller towns and cities like Boston, Louth and Lincoln had, so we wanted to get in on the action, and boy did we succeed!

We couldn’t have done it without a lovely band of volunteers, who manned the door, filled the goodie bags, served tea and coffee, helped at the video booth, manned the kids’ room and so much more.

Yes, there were issues, mainly because the event was so much more successful than we could ever have dreamed. There were animal rights groups, vegan food, vegan clothes, vegan chocolate, vegan cakes, vegan cheese, vegan cosmetics – you name it, we had it.

The workshops covered everything from vegan motherhood to making curry via Cath Kendall and John Curtin. And, yes it was heaving, busy, packed, a joy to behold for those of us who had worked so hard at pulling it off.

But it was also rewarding beyond belief. I wrote the terms and conditions, designed the receipts and checked people’s public liability insurance. I kept people up to date via email and also worked on some of the PR for the event. Informing the local press and radio and getting the message spread across social media helped enormously. We also conjured up the hashtag #thriveveganfestival in advance of the event to help people get the word out.

The help the people at the venue gave us on the day and in advance was invaluable – we actually called them because the toilets had run out of loo roll! We also had a minor issue with one of the electric points tripping – which was very annoying for the two food vendors affected. Luckily, it was sorted out and both stalls enjoyed a bumper trading day. Sadly, one outside food vendor didn’t make it due to breaking down on the way.

One of the best things for me about attending such events is actually talking to people. I get so inspired by other activists and vegans, it’s always brilliant to hear different perspectives and ideas, and there was plenty of that on Sunday. It’s also great to see the vegan community pull together to make things like this happen.

It’s also amazing to see how many vegan small businesses there are now. There are many of these events up, down and around the UK now and there are different independent companies at each and every one! Isn’t it fantastic to see so many entrepreneurs putting ethics at the heart of their working lives?

Every event I go to adds new vegan delights to my kitchen cupboards. This time I was over the moon to buy vegan BBQ sauces from Callowfit (www.musclefinesse.com) – they have a brilliant range of dressings and sauces and they are based in Peterborough  too!

Has veganism become a middle-class fad at the expense of animal rights?

It is true that the number of vegans is rising – fuelling capitalist companies’ money-lust into providing vegan options as they rake in more and more cash from the affluent vegans in Middle England.

The number of people taking part in specific animal rights actions is on the decline. Protests which used to attract thousands (such as the World Day events) now only attract hundreds – I don’t count the Official Animal Rights March as its aims are general rather than targeted.

I would love to review every new vegan product on the market and become the biggest vegan blogger in the world!!

I could give up my day job, do what I love doing and get very, very fat.

Alas, I can’t afford to buy most of the new vegan products because, like it or not, the cost of being vegan can be very, very high if you consume a lot of processed nonsense.

I watched a YouTube video earlier today while researching a vegan social media star (when did being famous for appearing on social media become a thing?), where somebody was criticising said social media star in an unflattering manner – I am still mastering the art of criticising people in a flattering way! Anyway, said critic was talking about how this person was putting lots of chemicals in their body – if you stick to processed food – vegan or not – then he does actually have a point.

My point is that most of this stuff is also very, very expensive, taking veganism into the middle-class Waitrose aisles and away from the perfectly acceptable Farm Foods, local market and Aldi shopping experiences.

One of the most patronising things vegans say on social media is “what price is a life?” – not exactly the best thing to tell somebody using a food bank or counting every penny of their supermarket shop! This is why I love to heap praise on Jack Monroe’s Cooking on a Bootstrap page – the vegan section (https://cookingonabootstrap.com/category/vegan-recipes/) is by far the best plant-based resource on the internet – it uses ingredients most people can afford and not “exotic” spices which cost three quid a jar!

Many of the so-called vegan “superfoods” like avocados are vastly over-priced (as well as being tasteless mush) and new fads described as “traditional” are not traditional in price – if it’s “natural” it should be cheap – it makes no sense for something which grows to cost extortionate prices – natural food which is good for you is either cheap or a con as far as I’m concerned. Superfoods seems to mean super high prices, so us working class folk are left eating veggie sausages and beans – although I personally prefer veggie sausages and beans to a slice of avocado surrounded by a posh swirl of sauce costing five quid and forcing you to buy a bag of chips on the way home following your meal.

A while ago, I saw a meme which stuck with me. IT said something like “Supermarkets have always had vegan aisles” above a picture of the fruit and veg section. I like this, I like the idea of buying ingredients and not products, I also want veganism to appeal to everybody – not just those with plenty of disposable income.

Veganism is seen as a middle-class fad by many and it is much more than that – Jack Monroe’s website proves how easy it is to cook basic, healthy vegan meals on a shoestring – you don’t have to pay two quid for a carton of plant milk or tiny block of tasteless “vegan cheese”.

My issue is, these expensive fads are making veganism inaccessible, they’re turning people off it. Sometimes vegans want a glass of lemonade and not a super smoothie that costs two quid a cup when you can get the same effect by eating an apple. As for “detoxing” – we used to have a liver for that – many of us still do! This very point was made by a doctor on my local radio while rubbishing all products which claim to do what the liver does naturally. But, hey, the liver doesn’t make money for products from quack nutritionists and their related companies.

Of course, we need processed food sometimes – most people work long hours – so some oven chips and chip Farm Foods vegan sausages and some own brand baked beans is just the tonic – and a more filling one than a Super Green Detox Energy-Boosting £25 smoothie from that shop which is closing down tomorrow due to having zero customers.